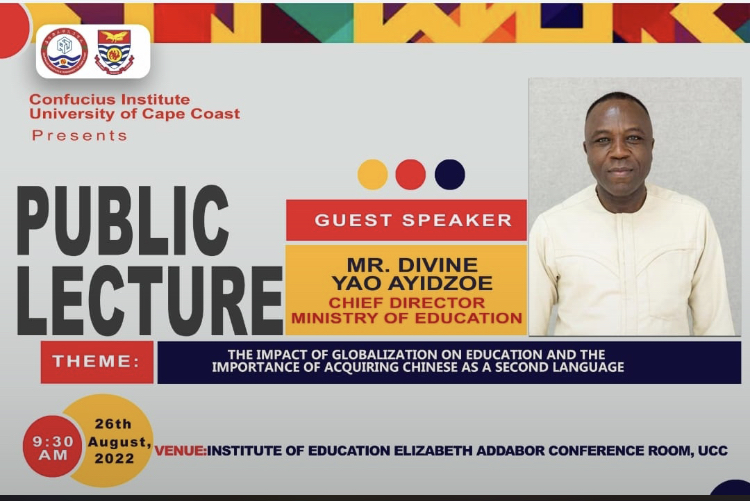 In her opening speech, the China Director, Prof OU Yamei, welcomed the dignitaries and thanked them for making time out of their busy schedules to honour the invitation. Before the lecture, there were a series of performances from the National Service Personnel and Chinese students including a song by Rachel Naandam and Joseph Kyeremanteng, Seth Dickson Kojo, and Martial Arts by Enock Essel.

The M.C introduced the speaker for the program, Mr. Divine Yao Ayidzoe, Chief Director of the Ministry of Education.

Mr. Divine Yao Ayidzoe first briefly thanked the organizers for granting him the privilege to give a public lecture. Mr. Ayidzoe in his lecture quoted many definitions of globalization given by other scholars and emphasized its advantages for education. He as well stated the role the ministry of education is playing on the global front.  According to him, globalization has made the world a global village so students must take advantage of this opportunity and learn a second language. He further encouraged them to take the Chinese language seriously. After the lecture, the floor was opened for questions and answers.

Mr. Ebenezer Aggrey stated in his remarks encouraged students to go beyond their local languages and learn more foreign languages such as Chinese language, so they can be competitive in the employment market after graduating.

In his closing remarks, Prof. Ishmael Mensah thanked the guest speaker and other invited guests for honouring the invitation and admonished the students to take full advantage of the opportunity given by the Confucius Institute to learn the Chinese language. The masters of the ceremony for the event were  Dr. Isaac Ibrahim and Ms. Jiang Pei Yun. 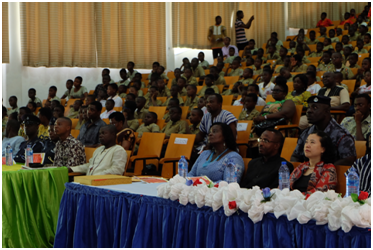